The Classic Voices of TGC Radio Chuck Bear’s radio career began at age 16 in his hometown Montgomery, AL and in the following 30 years was on the air in Dothan, AL, Columbus, GA, Phoenix, Houston, Dallas, Tampa and Nashville.

Although Alabamian by birth, Chuck identifies as Georgian by nature as the proud son of farm parents with deep family roots in the South GA metropolis of Hahira where much of his childhood was spent.

Chuck is also a nationally recognized voice talent for radio, Television and video productions and in his spare time designs and builds custom woodwork in an effort to busy idle hands.

A Grandfather of 5, Chuck and his family are avid UGA sports fans who believe the year actually starts the first weekend in September. Go DAWGS! David Nolin knew from the time he was 9 years old that he wanted to be on the radio, when his brother took him to see the studios and meet the DJ at WULA-AM 1240 in his hometown of Eufaula, AL. By the time he was 14, David was live on that very station, where he would remain for a number of years.

David was then on-air at stations in Columbus, GA, Montgomery, AL, and Panama City, FL. He returned to Columbus in 1989 and programmed WGSY/Sunny 100, to great ratings and revenue success. In 1996, David moved to Macon, GA, where he programmed legendary radio stations like 99WAYS and WPEZ/Z93.7.

Following 20 years in Georgia radio, David was lured back to the beach at Panama City Beach, FL, to program and manage WBPC/Beach 95.1. In 2018, David was honored with the Career Achievement Award and inducted into the Georgia Radio Hall of Fame.

He also operates Glenwood Studios, where he provides voiceover and production services for clients all over the United States.

David and his wife, Cathy, have a son, Mitchell, and a daughter, Melanie, along with three beautiful granddaughters, Abria, Nevaeh, and, yes, Georgia. The year was 1968. I had changed my major at Georgia to Journalism and the rest is history, which has now repeated itself. Starting the on-air part of my broadcast career at WDOL AM & FM, I was so fortunate to be hired by the late, great Charles Giddens to be on-the-air at 960 WRFC.

After we graduated from UGA, Nancy and I married in 1971. Money? What? WRFC created a position in the sales department for me where could create and voice my own clients’ commercials – a great transition. That led to the start-up for WAGQ-FM, Q-105 in Athens as Station Manager. The management side kept us moving, going to great radio stations like ROCK 105 WFYV-FM Jacksonville, 98 KZEW Dallas,  KMYZ-FM Z-104.5 Tulsa, WGRX-FM Baltimore and KISS-FM San Antonio, TX. As the 7th largest market, cable television in San Antonio was exploding in the early 90s, and I was fortunate to join KBL-TV as sales manager, and then KBL-TV in the Dallas Metro as GM.

Transitioning out of broadcast, I created The Gerson Group and combined forces with a great friend into a very successful consultancy in the trade show marketing industry, working with Fortune 500 companies worldwide for over 25 years. Being called back into radio by Sanders Hickey to be a part of TGC Radio is actually a dream come true for me. I love being back on the air and sharing it with this most experienced team of great talent. Thank you so much for listening!

Nancy and I have 2 successful adult children and 4 wonderful, loving grandchildren. I am a lucky man. When he was born, instead of a pacifier his parents put a radio in his room — he’s never been the same since. When he was 12 years old, he walked into a real Radio studio for the first time and was asked to introduce “KICKS,” by Paul Revere and the Raiders.  That’s all it took.  HOOKED!

Sanders has always been completely enchanted and forever in love with Radio.  The studios … the fun … the music … the creativity … and especially the people — those magical, talented, bigger-than-life personalities that make Radio truly “Sparkle!”

The idea occurred to him that he might actually earn a living with all of this. In 1982, Sanders and a partner applied to own his first Radio station. He and his wife, Karen, moved to Texas to launch K-Lite 106 FM.  It was 4 years of Texas-sized bliss.  But, while you can take the boy out of Georgia, you just can’t take “Georgia” out of the boy – and back to Bulldog Country The Hickeys came.

Over the past 35 years, with a brief 5-year stint as SE Regional Manager of The Arbitron Ratings Company (now known as The Nielsen Company), Sanders has owned and managed over 20 Radio stations, across the Sunbelt, in Georgia and Florida – and now across the world streaming on the Internet.

In 2020, Sanders reached out to a group of life-long friends (who just happened to be extraordinarily talented Radio Air Personalities, all from Georgia, who have gone on to star on some of America’s great Radio stations, as well Sirius|XM Satellite Radio) and proposed the idea of launching a new Streaming Radio station, based in The Classic City – Athens Georgia – playing the music we’ve grown up with.  And “Continuous Georgia Classics … The New TGC Radio” was Born – and HERE WE ARE! Sanders is on the air weekdays, 5 PM – 9 PM (EDT) | 2 PM – 6 PM (PDT).  So, Tap the App and Join the FUN! Over 50 years of experience as I started in radio while in High School in Atlanta, Georgia.  My first station on the air was WPLO-FM Atlanta doing a progressive top 40 rock format.

Attended the University of Georgia and worked Athens area stations WDOL AM & FM, WRFC, and WFOX.

After college graduation worked in some fabulous markets and heritage stations including:

Named in 1983 as one of the 5 best TOP 40 announcers in America from Electronic Media Magazine. Fred is a native of NW Iowa and has over 35 years of experience behind the mic. Starting his career in the small town of Cherokee, Iowa, and moving on to work in several markets including Phoenix, Oklahoma City, Topeka, Omaha, and Atlanta where he was on the air at both kicks 101.5 and true oldies 106.7.

Fred and his wife, Melissa, moved to Grayson, Georgia from Kansas in 2006, and in March of 2020, they became the first residents of the new Lakewood Village neighborhood at the Georgia Club.

Fred is very excited to be joining radio right here in his own backyard. So join him on Sundays from noon to 3 for the Sunday brunch request show here on The New TGC Radio! The Imaging Voice of TGC Radio

Ever wonder, who is that interesting voice between some of the songs on TGC Radio? Jeff Winter got his first microphone at age eleven in the form of a Webcor tape recorder, given to him by his uncle in Brooklyn who took notice of his nephew’s interest in radio, music, and voice.

Jeff got his first full-time job in radio, working in the music library of WHLI, Long Island, NY. In 1964, he volunteered to host a number of radio programs at the Hofstra University radio station, WVHC, and he also worked weekend programs on WFYI in 1965. Jeff was finally hired to host his own daily show on WBIC, Long Island, until January 1966, when he was drafted into the Army.

Jeff went to Fort Jackson, Columbia, South Carolina, and was assigned to the Public Information Office as a “Broadcast Specialist.” It was during this time he entered a talent contest at the Service Club and won it with his comedy act of lip-synching records.

In May 1966, Jeff performed his act for the director of the Third US Army Soldier Shows, based at Fort McPherson, Atlanta. He was accepted and transferred to Atlanta to join the troupe of soldiers in shows touring the Southeast. After his service, Jeff decided to make Atlanta his new home.

Jeff began his Atlanta on-the-air radio career in 1967 on WKXI, later renamed WQXI-FM. He spent a lot of time voicing commercials for the station’s advertisers and studied what made good commercials tick. Jeff departed WQXI-FM to become the first-morning man at the brand new 96rock, WKLS, Atlanta. A breakthrough occurred in 1975 when some high-profile regional ad accounts hired Jeff as their voice. This led to more exposure, more work, and interest from Atlanta and New York talent agents.

In 1976, Jeff was heard on his first network TV campaign for Fresca, and it was huge! As a richly talented national voice actor, Jeff’s voice work on Trident Gum, Jell-O Pudding, Cover Girl and so many more great network TV and radio clients is exemplary. We’re so glad to have Jeff as the “imaging” voice of TGC Radio. I got my start in radio at WMDS at Miami-Dade Community College, then moved to Columbus GA, and worked at WEIZ-WDAK radio on-air doing afternoons and evenings in 1982, then eventually moving to WGSY in 1986 for a midday shift. I moved to Atlanta to work mornings at The Weather Channel in 1989 forecasting weather for many major market radio stations around the country as well as Sirius and XM, and also the voice of the local forecast on cable TV nationwide. I’m excited to be working with the kind folks at TGC radio and I can’t wait to see what the future holds!

Our Neighborhood...Our Music.
Your Continous Georgia Classics on THE NEW TGC RADIO. 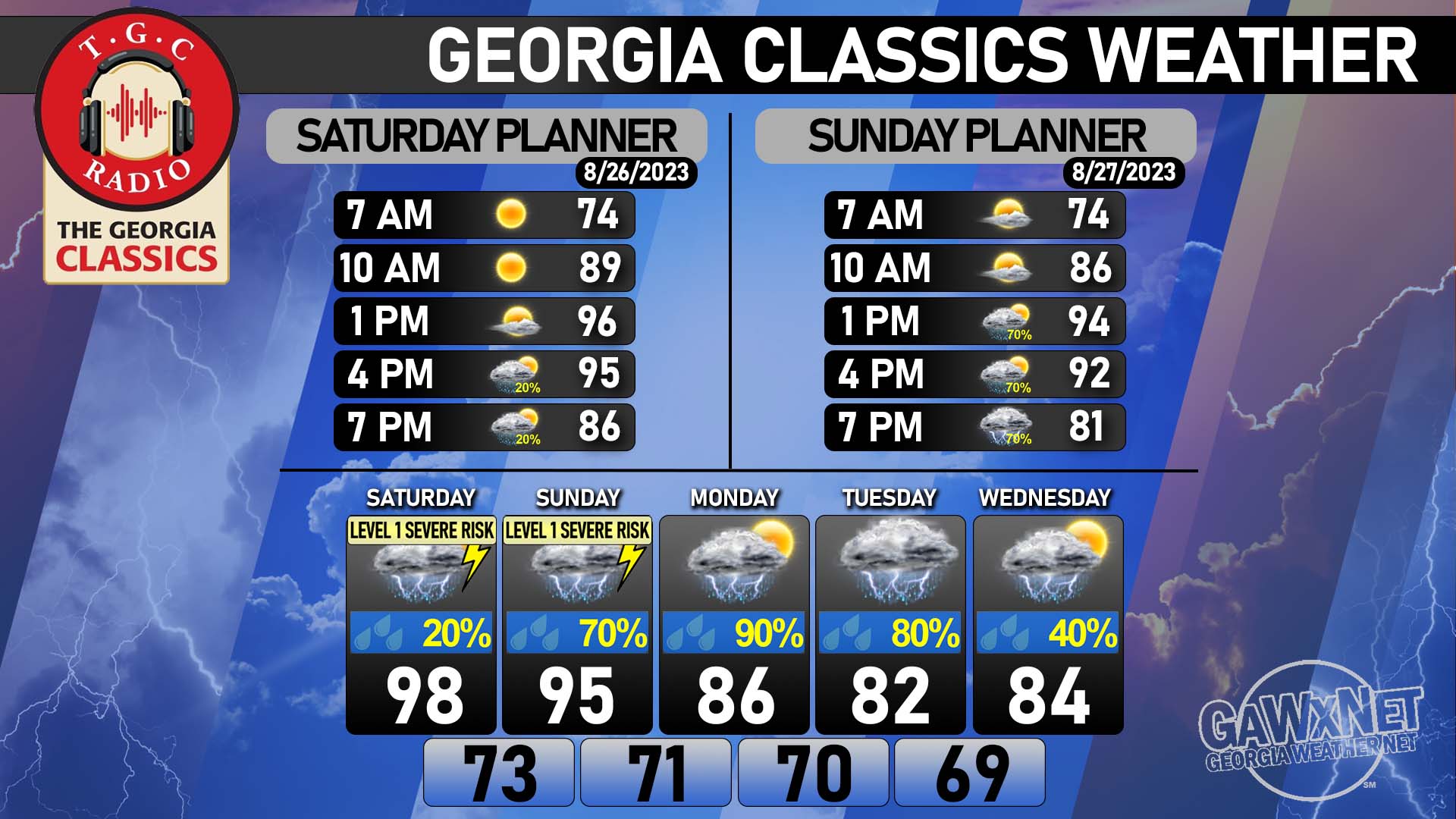